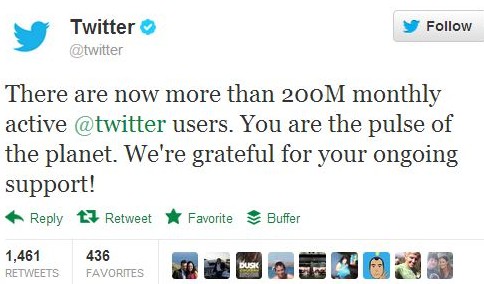 Fast-forward six months later to March 2012, and that number had jumped to 140 million. Well, that growth just keeps on coming, as earlier today Twitter announced yet another significant milestone, with the social micro-blogging platform now more than 200 million users strong.

Which means Twitter is continuing to add 40 million new (and, critically, active) users every six months – a little over 1.5 million per week.

The update came via an announcement from the @twitter account a moment after 10am ET, and said: “There are now more than 200M monthly active @twitter users. You are the pulse of the planet. We’re grateful for your ongoing support!”

NFT, A 75 BILLION MARKET BY 2025. BUT BEWARE OF LEGAL IMPLICATIONS WITH SPONSORS AND RIGHTS

EUROVISION 2022, TALKWALKER: MAHMOOD & BLANCO ARE THE MOST SOCIAL IN THE WORLD