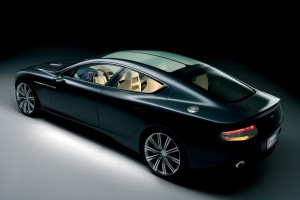 Gaydon, 15th April 2009. The Aston Martin Rapide has moved into the final stages of its development programme, on course for a public debut in late 2009, with the first customer cars due to be delivered in early 2010.

First revealed as the Aston Martin Rapide Concept at the Detroit Auto Show in 2006, the Rapide is one of the most eagerly awaited cars of the year. As Aston Martin’s first true four-door production sports car, the Rapide encapsulates the core values of the brand within an elegant, high-powered sports grand tourer, with four full-sized seats, generous accommodation and luggage space and trademark Aston Martin performance.

Aston Martin Chief Executive, Dr. Ulrich Bez said: “The Rapide will be the most elegant four-door sports car in the world. It completes the Aston Martin range conveying our established attributes of Power, Beauty and Soul”.

“In 2010 there will be an Aston Martin for every type of sports car customer regardless of the demands of their lifestyle. The Rapide is the most versatile, bringing a new benchmark of luxury and refinement to both driver and passenger.”

The concept received worldwide acclaim for its design as well as strong expressions of interest from customers. Following the purchase of Aston Martin in June 2007, the production version of the Rapide was approved and development began in earnest. Underpinned by Aston Martin’s VH (Vertical/Horizontal) extruded aluminium architecture, the Rapide retains the elegant, flowing proportions that are integral to every Aston Martin and remains remarkably faithful to the original design study.

The cohesive design language and elegant form of the Rapide ensure it is a perfect complement to the other cars in Aston Martin’s line-up. From the outset, the Rapide was designed with no aesthetic compromise. “We wanted to make the most beautiful four-door sports car in the world” Aston Martin’s Director of Design Marek Reichman stated when the concept was first shown.

The signature elements of Aston Martin’s design language translate seamlessly to the four-door format, with key features such as the ‘swan wing’ doors – rising upwards and outwards as they swing open – facilitating access to the two beautifully trimmed individual rear seats. The bodywork flows effortlessly from front to rear, where a kicked up tail and strong rear shoulders wrap around the wheel arches to create the classic Aston Martin silhouette, enveloping the additional doors, seats for children or two adults on shorter journeys and functional luggage capacity.

Described by Reichman as a lithe ‘long distance runner’, compared to the sprinter-like poise of the V8 Vantage and the muscularity of the DBS, the Rapide’s lines are a master class in maintaining purity of proportion and vision. Detail design is crucial, with Aston Martin’s iconic side strake extended to run through the front doors before blending into the rear door, lending a sense of dynamic thrust to the Rapide’s stance.

The Rapide has been subjected to Aston Martin’s rigorous testing programme including extreme climate testing and dynamic performance trials at the company’s new Nürburgring Test Centre to ensure it will display the brand’s integral high speed abilities. The last stages of endurance testing are now underway with final sign-off expected later this year before a production car is debuted in September.

The Rapide will offer performance purity and the same level of sporting ability as all modern Aston Martins. Powered by a version of Aston Martin’s 6.0 litre V12 engine producing 470bhp and 600Nm of torque and, hand built at the company’s engine facility in Cologne, the Rapide’s rear wheels are driven through a highly responsive Touchtronic gearbox. Performance figures have yet to be revealed, although early indications are that the Rapide will offer class-leading performance and dynamics, alongside new levels of refinement and luxury.

The Rapide will be built at a new production facility in Graz, Austria managed by the acclaimed vehicle manufacturer Magna Steyr and co-ordinated by a fully integrated Aston Martin team from the UK. The new production facility is closely modelled on the Gaydon factory and will combine a sophisticated modern production line with the Aston Martin traditional hand-finishing skills, a proud blend of craft processes and attention to detail. The interior will further develop Aston Martin’s skilful use of genuine high quality materials, applied appropriately and effectively to ensure that form always follows function.

“Rapide will exceed expectations to deliver elegance and practicality in a form that will allow driving enjoyment and comfort beyond anything that exists today,” says Dr Ulrich Bez, “The Rapide will exist in a class all of its own, a true Aston Martin with the high performance and dynamic excellence that defines the brand, and a luxurious sporting grand tourer without equal.”