Gaydon, Warwickshire. Tuesday 3 March 2009 – Aston Martin will present a One-77 technical showcase at the Geneva Auto Salon on 3 March 2009. Chassis no.1 will be on display as an exposé throughout the show detailing the quintessence of Aston Martin engineering and design expertise.

The One-77 is Aston Martin’s definitive sports car, one that epitomises everything Aston Martin from technology, the hand-craftsmanship of the hand rolled aluminium panels to the attention to detail. A culmination of all the marque’s know-how, the One-77 delivers effortless beauty guaranteed to stir the senses with performance potential eclipsing any previous Aston Martin.

With the performance and durability phase of the One-77’s intensive development programme soon to commence, the 79th Geneva Auto Salon provides the perfect stage on which to reveal the remarkable engineering, advanced technology and exotic materials that lie beneath the One-77’s extraordinary exterior.

For Aston Martin’s Chief Executive, Dr Ulrich Bez, revealing the One-77’s secrets is a proud moment: “Right from the very beginning of the project the vision for One-77 was very simple: It had to combine high-technology with hand-built craftsmanship, and demonstrate the unique capabilities and passion of our designers, engineers and technical partners.

“Quite simply it had to be the ultimate expression of Aston Martin. As you can now see, we have achieved that goal in magnificent style.”

Chris Porritt, One-77 Programme Manager continued: “We wanted to create something that wows you as much when you see what’s under the skin as the exterior styling itself. We started by identifying the most technologically exciting front-engined, rear-wheel drive cars in the world: those from the DTM race series. We then applied the principles and technology that feature heavily in their design and translated it to a road car application.”

Consequently the One-77’s structural core is a lightweight and immensely rigid carbon fibre monocoque. Conceived and designed at Aston Martin’s Gaydon HQ, the monocoque, or ‘tub’, has been built in partnership with Multimatic (MTC). As world leaders in carbon composite technology, advanced vehicle analysis and dynamic simulation, MTC brings unrivalled specialist capabilities to the exacting challenge of the One-77 programme.

Employing the classic formula of double wishbones at each corner, the One-77 features inboard suspension front and rear, with pushrods employed to transfer vertical suspension movements to the horizontally mounted spring/damper units. A practice taken directly from racing car design, the main advantages of inboard suspension are a reduction in unsprung weight and the ability to package the suspension components more effectively.

The dampers are fully adjustable and feature advanced Dynamic Suspension Spool Valve (DSSV) technology; a world-first for a road car application. These special valves are state-of-the-art even at the highest levels of motorsport, and use high-precision machined components to enable the shock-absorbing characteristics of the damper to be changed without having to remove them from the car, as is the norm. 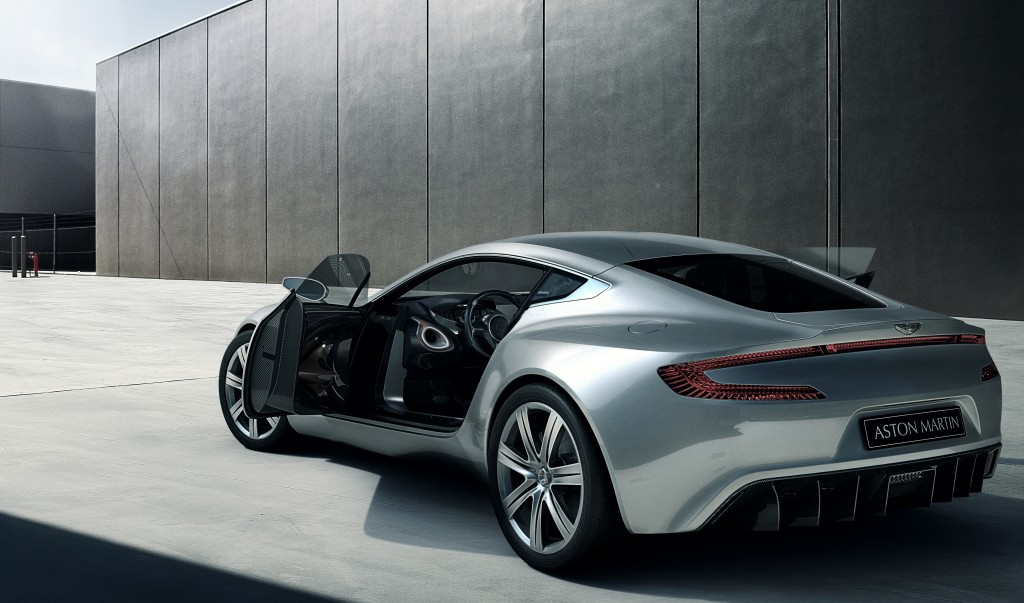 Underlining the truly bespoke nature of the One-77, once delivered to its owner, the car’s suspension characteristics will be precisely set-up by Aston Martin engineers to suit their exact requirements, from settings suitable for the ultimate long-distance GT, to a machine capable of conquering the Nürburgring Nordschleife.

While functionality and efficiency are paramount in the design and construction of the One-77’, so too is aesthetic beauty. To this end every single component has been crafted from the finest materials with absolute attention to detail. From the mesmerising weave of the glossy carbon fibre tub and the abstract, sculptural beauty of the dry sump’s oil reservoir, to the unerring precision of the billet machined aluminium suspension mounts, the One-77’s rolling chassis is an automotive masterpiece.

Of course the irony is that the vast majority of these exquisite components will be hidden from view in the finished car, yet each and every piece is a work of art in its own right. It’s this extraordinary workmanship and money-no-object commitment to quality that makes the One-77 unique.

Naturally, such a spectacular chassis demands – and gets – an equally exceptional drivetrain. It comes in the form of an immensely potent 7.3-litre, naturally aspirated V12 engine. Thanks to the adoption of a dry-sump oil system the engine is mounted 100mm lower than in any previous V12-engined Aston Martin road car, which helps keep the One-77’s centre-of-gravity as low as possible. To further aid agility and endow the One-77 with progressive handling and stable, predictable on-limit behaviour, the engine is also mounted 257mm aft relative to the front wheel centreline. In so doing the front-mid-engined layout shared by all of Aston Martin’s current road car range has been taken to a new level.

The One-77’s magnificent power unit is an extreme evolution of the 6.0-litre V12 engines fitted to the DBS, DB9 and new V12 Vantage models. Like the collaboration with MTC for the build of the chassis, Aston Martin has chosen a world-leading partner with which to develop the motor: legendary engine builders, Cosworth. It has proved to be the perfect collaboration, as Chris Porritt explains.

“Our brief to the engine team was for them to take the 6.0-litre V12 as far as it could go, both in terms of output and weight reduction. The targets were a power output of no less than 700bhp with a 10 per cent reduction in engine mass. Incredibly, the Aston Martin and Cosworth engineers achieved a mass reduction of some 25 per cent, and although we’ve yet to complete the final engine calibration work, I’m confident we’ll see in excess of 700bhp. It’s an awesome accomplishment, but one that’s typical of the One-77 project, for it has consistently brought out the very best in everyone involved.”

Wearing Pirelli P Zero Corsa tyres (255/35 ZR20 front, 335/30 ZR20 rear) developed specifically for the One-77, all 700+bhp is transmitted to the road through the rear wheels via a new six-speed gearbox. Controlled via column-mounted paddles behind the steering wheel, this robotised sequential manual is a new generation of Aston Martin’s familiar transmission. Though it is made specifically for the One-77 and features specially strengthened internals to cope with the tremendous power and torque, the lessons learned in its development will ultimately find their way into the company’s series production models.

It’s a mark of the inherent capabilities of Aston Martin’s acclaimed lightweight Carbon Ceramic Matrix brake technology that it has been used as the basis for the One-77’s braking system. The internals of the calipers have been re-engineered to transmit less heat from the brake pads into the brake fluid, while the discs themselves have been developed to ensure the maximum possible contact area between the face of the disc and the brake pads for improved stopping power. Due to the One-77’s increased performance, special attention has also been paid to brake cooling, as the brakes have less time to cool between bursts of acceleration. 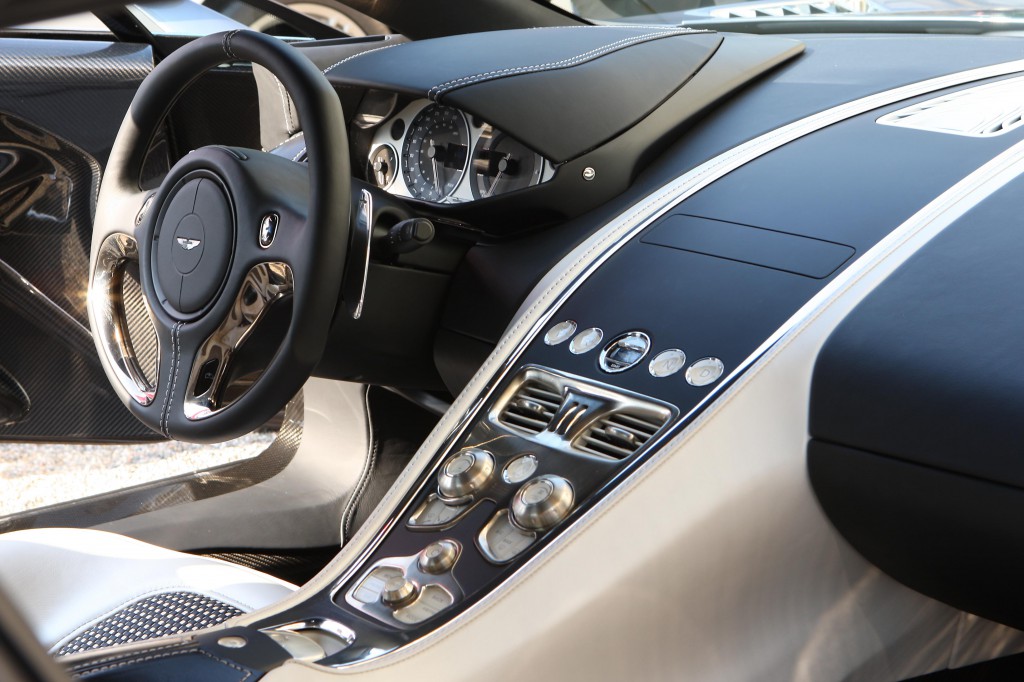 With a projected weight of 1,500kg the One-77 will occupy the very highest echelons of road car performance. Top speed is confidently predicted to be in excess of 200mph, with a 0-60mph time in approximately 3.5sec. Perhaps more importantly, thanks to the purity of a front-engined, rear-drive layout, the responsiveness and immense tractability of a naturally aspirated V12 and the low mass, high-rigidity properties of a carbon fibre chassis, the One-77 promises a driving experience of unrivalled intensity and excitement while representing the world’s most desirable automotive art form.